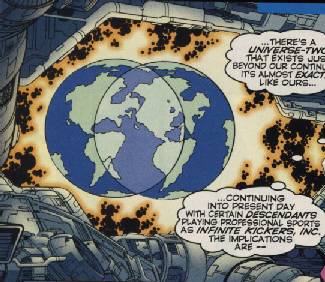 Alternate Realities are parallel universes that involve some degree of Marvel Comics and DC Comics elements combined. These can be What If? / Elseworld versions of the established Amalgam Universe, mash-ups between multimedia versions of characters from Marvel and/or DC, entirely original amalgamations, or any combination of the three.

Within the published Amalgam materials there existed two sets of Amalgam heroes that were created within the Marvel Universe (ALL ACCESS and UNLIMITED ACCESS), which also led to the revelation / creation of a number of alternate Amalgam Universes, with varying degrees of synchronicity with the 'mainstream" Amalgam Universe (Earth-9602), thereby establishing the existences of Alternate Realities.

Additionally, the Wave 2 Amalgam Comics utilized the "Animated" Amalgam Universe for DARK CLAW ADVENTURES #1, and Universe-Two as a location in CHALLENGERS OF THE FANTASTIC #1, setting the precedent of multimedia variations and mainstream alternate reality amalgamations, respectively.

A
B
C
D
E
F
H
I
M
U
■
Retrieved from "https://amalgamfanon.fandom.com/wiki/Category:Alternate_Realities?oldid=7288"
Community content is available under CC-BY-SA unless otherwise noted.